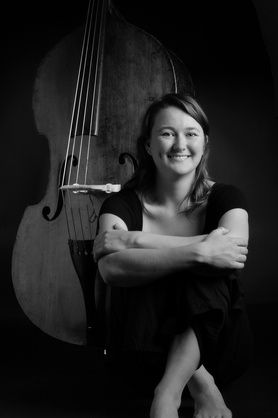 Tamara completed the improvisation course at the Victorian College of the Arts, graduating in 1999 with a Bachelor of Music Performance. She has studied with Gary Costello, Lloyd Swanton, Ben Robertson, Andrew Moon (M.S.O.) and Ed Schuller (US), Mark Helias (US) and Larry Grenadier (US). She recently completed the Masters course (research) at VCA, Melbourne in 2008.

Currently, Tamara is leading, writing and arranging for groups ‘Murphy’s Law’, the co-led trio ‘Keller-Murphy-Browne’ with Andrea Keller and Allan Browne and the ‘Fran Swinn Trio’, in addition to performing regularly all over Melbourne with some of Australia’s leading contemporary jazz musicians. She also teaches at the Victorian College of the Arts, Genazzano Girls School and St. Catherines Girl’s School.