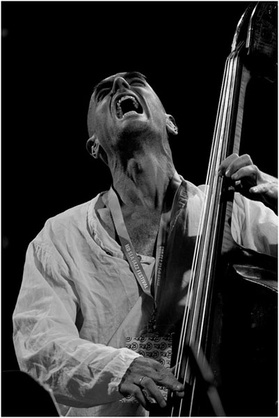 Simon Starr has been performing, recording and touring since 1993. A VCA graduate, his teachers have included David Krycer, Neil Jowsey, Geoff Kluke, Andrew Moon, Dave Holland and Gary Peacock. With his deep love of all types of music and hyper-intense focus, Simon's grooves and idiosyncratic melodic invention have featured in every type of Australian and International music, both here and overseas. Currently living in Israel where he is researching Yemenite, Moroccan and Balkan music, Starr has featured on over 50 recordings as a bassist, including those that feature his compositions and arrangements - 7 with his co-operative group Frock, 1 with AJME, 2 with the National Living Treasures, 2 with the Adam Simmons Quartet. Starr is always writing, practicing, composing, touring and recording, and will release new album Dubi's Limoncello imminently.
Some previous associates : Frock, AJME, NLT, Adam Simmons, Kurt Rosenwinkel, Greg Hutchinson, Mark Levine, Dave Samuels, Eli Degibri, Omri Mor, Ian Moss, Joe Camilleri, Suze DeMarche, Oldman River, Lior, Doug DeVries, Rob Burke, Lliam Freeman, Martha Baartz + many many more musicians, friends, acquaintances and a few enemies. Such is life.