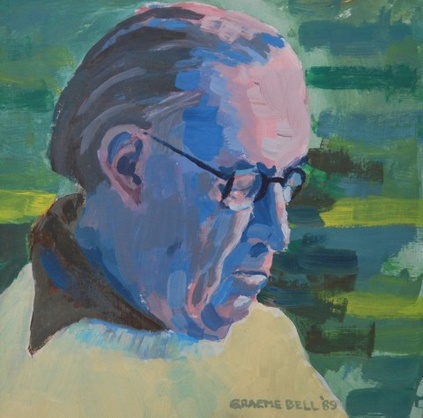 Roger Bell, the younger of the two Bell brothers, who spearheaded the post-war resurgence of improvised jazz in Australia, has died in Melbourne after a long illness.

A gifted and virtually self-taught player and inimitable vocalist, his bright driving but melodic and lyrical trumpet lead was much of the striking sound that characterised the Graeme Bell Band from the forties onwards.

His family had a major musical background. His mother Elva (Rogers) was for many years a contralto recitalist of distinction and had toured Australia and New Zealand in Nellie Melba’s company. His father John was well known for musical comedy and music hall performances, and on the early ABC.

Roger is credited with seducing his brother from classical piano into the world of jazz. At Scotch College he met with kindred spirits, the late Ade Monsbourgh (A.O.) and the future medico “Spadge” Davies and his musical path was set. He and Graeme became absorbed in the recordings of the classic negro and white jazz spectrum. By the middle thirties, with Roger initially on drums, they were playing some local dances. These associations developed into reasonably disciplined ensembles, the music of which was developing jazz character, despite the need to meet the requirements of playing much popular orchestrations and featuring “old time” dances. This was followed by less restricting quartet engagements at Portsea and St Kilda.

By the early forties, and with talented Adrian Monsbourgh on trumpet and trombone as well as the unique Don “Pixie” Roberts on clarinet, Roger was leading the group of musicians by then known as the Bell Band, playing at major dance venues such as the Heidelberg Town Hall and the Palais Royale at the Exhibition Buildings.

Graeme returned in 1943 from entertaining troops in Queensland to assume full-time leadership of what was now a formidable jazz music ensemble. All the other members had day jobs; in Roger’s case in engineering and drafting.

In 1943 William H. Miller, a Melbourne Oxford-trained lawyer, started his recording label Ampersand, which spread the band’s reputation. Further, the first Australian Jazz Convention (still continuing today) drew players and bands from interstate. It exposed Roger’s playing and singing to a larger Australia-wide audience, in a period (pre-rock and roll) of immensely popular jazz for dancing.

All this was consolidated by the first commercial recordings of the band by EMI in 1947. There were few dancers of the era that didn’t know these records with Roger singing on “Ugly Child” and other Graeme Bell Band standards such as “Smokey Mokes”.

The band went to Prague in 1947 to the World Youth Festival, sponsored by the Eureka Youth League, whose hall in North Melbourne they used as a weekly night club, The Uptown Club.

By their return in 1948 they were widely known in Europe and had sparked a jazz-for-dancing movement in the UK. Roger’s infectious playing and singing were very much part of the success of the tour. A three-month ABC tour of all states consolidated the band’s reputation. They again visited Europe and the UK in October 1950.

After the core band broke up in 1952 Roger played lead trumpet in popular jazz groups such as Frank Traynor’s Jazz Preachers, Max Collie, The Melbourne Jazz Club house band and with his own group The Pagan Pipers. He continued to make recordings, particularly with the latter, and played at many festivals.

His substantial body of compositions of basic themes for improvised jazz were recorded by his and other bands.

He again visited Europe in 1971 and 1981, playing with old friends such as Humphrey Lyttelton, who died this year, and Claude Luter in Paris.

Witty and well-read, Roger Bell was an engaging companion with a wide range of friends in the music and art worlds

Known to his friends as the “Badger” he had difficulty in finding one for the record cover (pictured) and had to make do with a stuffed wombat from the Museum of Victoria.

His first marriage to Bonnie failed and he later married Lorraine Watson, a physiotherapist, with whom he travelled widely and who has been his constant support over his long illness.