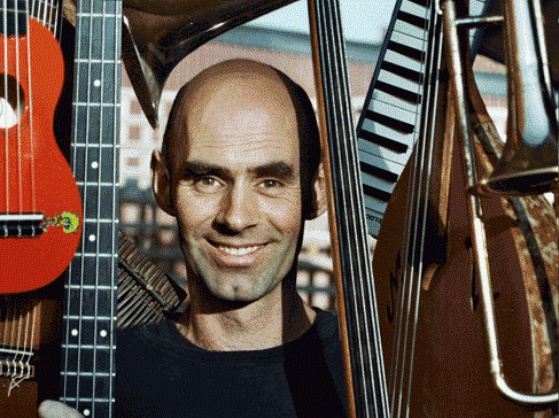 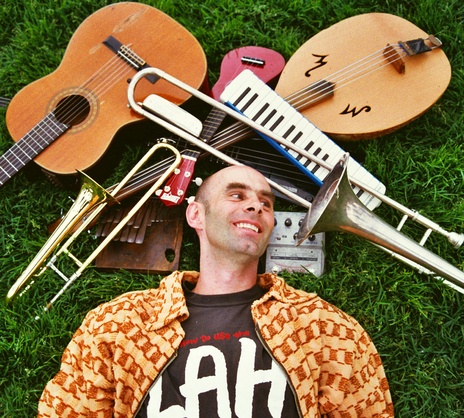 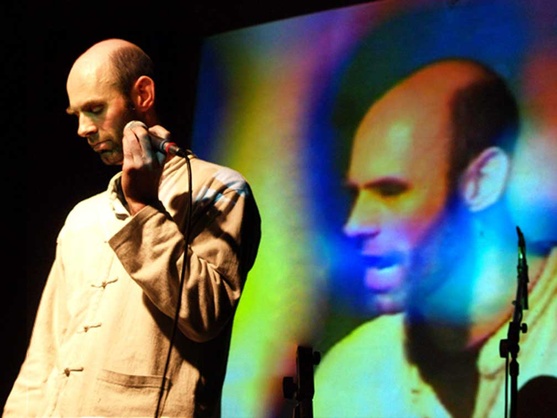 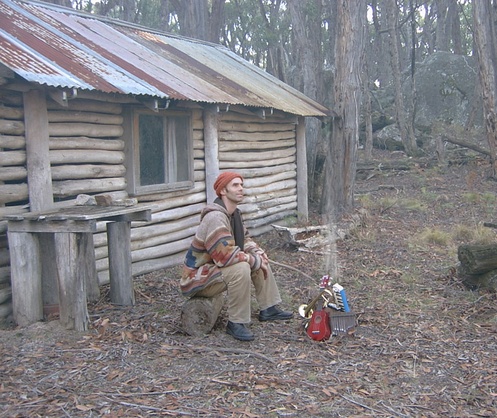 Around the world and into your brain, vocal adventurer, multi-instrumentalist and looping beatboxing songwriter Mal Webb sings his songs about all manner of stuff, using all sorts of vocal techniques, guitar, mbira, slide trumpet, trombone, chromatic harmonica and a loop recording pedal called Derek. It's a lip to lung journey through the physics, physiology and phrivolity of all the sounds a face can make. Sideways yodelling, beatbox, harmonics, throat singing, uvular fluttering, advanced clapping. He's like Bobby McFerrin, Aphex Twin and Cole Porter playing scrabble. Ebulliently eclectic. Nefariously varied. Family fun free from facile frippery. "You're a freak!"-Ani DiFranco

Mal Webb, B.Ed.(music) Melbourne Uni
Born in Melbourne in 1966, Mal started learning percussion at the age of 4. This led to singing, piano, moving to Canberra and writing facile pop songs with his brother John for the imaginary band, Spider. At 10, he took up trombone. At 12, and back in Melbourne, he started getting into jazz theory and composition. At 14, he did his first paid gig, playing trombone with a big band at the Hilton Hotel ($80 and a meal: It set quite a precedent!) At 16, he took up bass guitar. From 1984-88, he studied secondary teaching at Melbourne University Institute of Education. At this time, he became very into Ghanaian music with the group Adzohu, as well as being the musical director of the major theatre show, Wogs Out of Work. Mal's diverse tastes in music led him to be a member of many groups (6-16 at any one time to the present day). He played the support for David Lee Roth in Melbourne and Adelaide, Australia with Afrodisa (a soucous/hilife band).
1987 saw the start of the Oxo Cubans, a brass, percussion and vocal group that went on to tour much of Australia and release 4 CDs, before taking an extended break in 1996. In the Oxos, Mal became more involved in singing and song writing. In 1994, he toured to the Bogota Theatre Festival (Colombia) with roving circus drumming group, Batacuda (of which he was a founding member). The same year, he took up guitar and began doing solo gigs.
Mal's interest in the vast possibilities of the voice increased and in 1996 he did his first solo a cappella show (for the Boite) and formed the a cappella trio Milo, which became Sock after a change of personnel. It featured 3 men, complex arrangements of swapping parts, vocal drumming and a little comedy. Sock went on to release a CD and tour a little. Also in 1996, Mal began using his (slightly rusty) teaching skills, running workshops in alternative vocal techniques and being a band. His piano composition called Schvink Chass was published in the book, "Piano Miniatures" (Red House) and later recorded by Michael Kieran Harvey. In 1997, Mal got the job writing, playing, singing and recording the music for the ABC TV and Working Title co-production, "The Adventures of Lano and Woodley". The show went for 13 episodes and honed Mal's recording skills. In 1998, he recorded the Sock CD and the award winning CD "Aloukie" by Zulya Kamalova. That year he also began playing trombone and recording with the Overtones, which became Bomba. In 1999, the Sock recording of his song "Roofrack" come runner up in the Canadian Acapella Song Contest (tragically, to a song called "Humpty Dumpty Jumped").
In 1999, Mal recorded his first solo CD, Trainer Wheels. He formed Totally Gourdgeous with Penelope Swales, Carl Pannuzzo and Andrew Clermont, all playing gourd instruments (Mal playing bass, mbira and trumpet). They have recorded 3 CDs and are touring extensively (including Germany, Austria, UK, Denmark and Slovenia). In 2000, Mal began working with hurdy gurdy player Barb Dwyer. They have toured to France and Germany with their band, Hurly Burly. In 2002, Mal became musical director (and brass teacher!) of theatre company 5 Angry Men for their Melbourne Festival show, The Flag.
Mal played mbira and sang "Eagle Rock" with Ross Wilson on John Safran's Music Jamboree on SBS. In the 2003, 2004 and 2005 Australian Science Festivals, he performed solo and gave workshops in the physics of "beatbox and beyond". In 2004, he began working as part of Music Outback Foundation, teaching music at Ti Tree School in Central Australia (focusing on songwriting in the indigenous languges there). And he gave workshops at the Spark 2005 Arts Conference for People with a Disability and has done similar work for Nulsen Haven in Perth.
He did mouthdrums and stuff for Kaya on the X Factor (Channel 10) and in 2006 he made an appearance on the "Look what they've done to my song mum" segment of Spicks and Specks (ABC TV). In 2006 he joined Chambermade Opera's "Phobia" for tours of Singapore and the Nederlands. The same year, he began helping out with research into voice acoustics, principally with French physicists Nathalie Henrich and Lucie Baille, but also with all manner of physicists who are keen to poke cameras into his face. In 2008, he began doing a few collaborations with electronic/ music producer Spoonbill.
In 2009/2010, Mal recorded horns for Aurora Jane's album "Deep End" and has toured with her around Australia, Canada and India. In 2010, he composed 5 songs for the Ping online music teaching program (in collaboration with Songroom). In 2010 and 2011, he began collaborating with many others, including Casey Bennetto (Keating the Musical) and Opera Australia counter tenor, Tobias Cole. In 2011, he wrote, performed and recorded the music for Frank Woodley's TV show, "Woodley" (ABC). In 2012, he accompanied legendary Sundanese poet Kang Godi Suwarna on his Australian tour. In 2013, Mal recorded horns and began touring with Formidable Vegetable Sound System, including UK, Denmark, Portugal, New Zealand, Canada and all over Australia.
In the same year, he began performing with ex-Orchestra Victoria violinist Kylie Morrigan and wrote and recorded the music for Little Wing Puppets' production "Spike the Echidna". Also in 2013, his song "Bike" was included in the ABC Sing! book (and a corrected version was added to the following year's book) and in 2014 the same song was published (correctly) in Bloomsbury Press UK's "Music Express".
In 2015, he toured to Indonesia with Kang Godi Suwarna in Mainteater's "Urat Jagat" and wrote and recorded the music for UK puppet company Wishworks' production "Whsipering Smith".

Mal has made 4 solo CDs and a DVD "Live and Instructional". See gigs for current events.