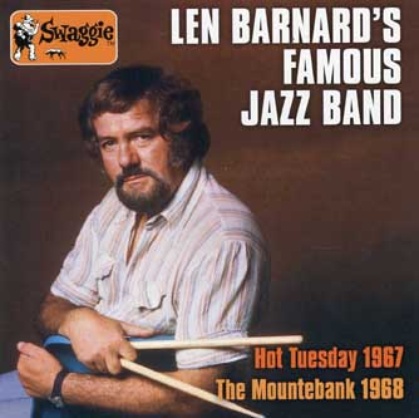 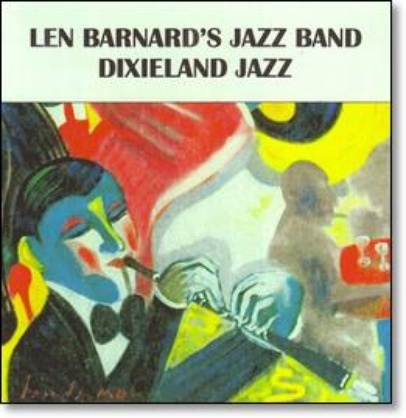 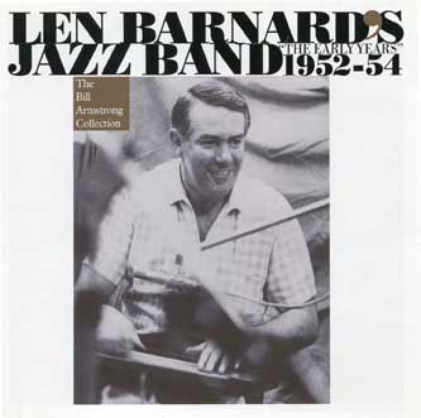 Len Barnard, Australia's best loved Jazz drummer, has died at the age of 76. He was also a pianist, raconteur, wit, bon vivant, and honorary life member of the Musicians' Union. His passing brought to a conclusion a singular contribution to jazz in this country, running the gamut from traditional jazz (including leading the band that brought his cornet-playing younger brother Bob to prominence), through swing, to modernism (including a high-profile phase with Galapagos Duck).

Leonard Arthur "Sluggsie" Barnard was born into a musical family in Melbourne on April 23, 1929. His mother Kath was a singer and band-leader, and his father Jim played saxophone and drums. As a teenager he began playing drums in his mother's band during World War II. Swing was the prevailing music, and he was infatuated by the drumming of Dave Tough when Artie Shaw's Navy Band came to Melbourne. But in 1948 Len and Bob switched allegiance to the earlier classic jazz forms, inspired by Jelly Roll Morton's Red Hot Peppers' Doctor Jazz.

When he formed his own band to play this music he initially played piano, before taking over the drum throne. In 1951 Len Barnard's Dixieland Jazz Band recorded the first Australian long-play album, which resulted in being given a contract to record for the major international Parlaphone label in Sydney. Besides his brother Bob, others to pass through Len's band included Ade Monsbourgh and Doc Willis. In 1955 it undertook a major Australian tour which proved financially disastrous, and led to its demise. Len then worked in Brisbane for while, before returning to Melbourne in 1956, where he played in the big band of the Palais de Danse.

During the '60s Len worked with such seminal figures as Monsbourgh, Roger Bell and Dave Dallwitz, before moving to Sydney in 1974. He worked with Judy Bailey, Errol Buddle and John Sangster (including the recording of the latter's famed musical interpretation of The Lord of the Rings in 1975). He then joined Galapagos Duck in 1976, touring extensively (including to Europe and America) and performing regularly at The Basement. His association with the band lasted on and off into the mid-'80s.

When he left the Duck for the first time at the end of 1980 Len immediately joined his brother Bob's band, returning to his love of classic jazz. In the early 1980s he serialised his autobiography across seven issues of Jazz magazine, including this insightful observation about original compositions (from an occasional composer):

"...the good ones can be likened to a good play, in that a witty comedy must have bottom as well as wit. That is to say it must be capable of holding an audience if the wit were removed. It's the old architectural trick: you must ornament your construction, and not seek to make your construction out of ornaments."

He toured Asia with both Buddle and Don Burrows, and continued to perform and record in Sydney with Bob, the American pianist Ralph Sutton and the late Tom Baker, among others. In 1994 he joined Geoffrey Ogden Browne's 10-piece Cafe Society Orchestra, recreating sophisticated arrangements from the 1920s and '30s, and enjoying a residency at Balmain's Unity hall Hotel. There were visits to the various festivals (including the pivotal Wangaratta one), more recordings with his brother, and, in 1997, the recording of The Last Will and Testament of John Sangster with a cast including Bob, Baker, Graeme Lyall, Tony Gould, Ian Bloxsom and Chris Qua (released in 2002).

Len's innate musicality made him versatile enough to convincingly cross between jazz idioms. In essence, he always played the music rather than the drums - with a singular vivacity, wit and empathy - and thereby the drumming took care of itself. He could work up a tremendous head of steam on the "shout" choruses of a classic jazz stomper, and was also one of the country's most beautiful brushes player on a ballad. He swung and he had extraordinary finesse.

The final entry in his notebook (as provided for the hundreds of people who attended his Sydney wake) read:

"Try to combine exterior time and the inner pulse in a meaningful way. Exterior time is firm, somewhat automatic and obvious. What comes from the inside is more subtle. Interior time depends on instinct, particularly the capacity to adjust to the difference among players, while creatively blending and pushing them.

"A drummer's positive inner-time impulses make possible performances that are flexible, human and communicative. Drums are a musical instrument, and if they're not musical they're terrible."

Len was always musical, and much, much more.

He died in hospital on November 5, having been afflicted with multiple health problems. He is survived by two children from his first marriage, Heather and Robert, two from his second, Rebecca and Lucy, and his partner Sandra (Sam) Williams.