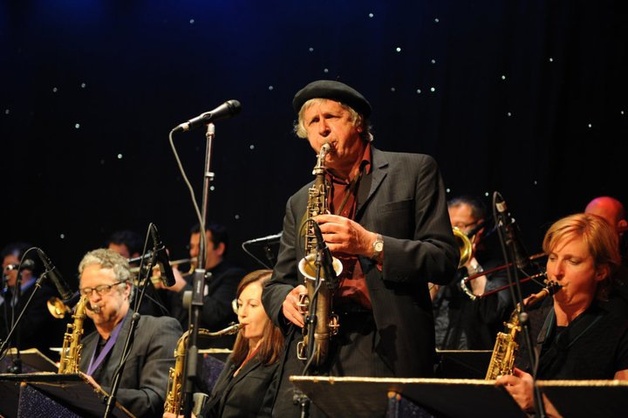 Ken was born in Melbourne in 1947 and began studying clarinet when he was 14 years old with Alan Eaton. A few years later, he took up alto sax and began to play with friends. At that time he was studying maths and psychology at university where there was a jazz club, opportunities to sit in with bands as well as attending intervarsity jazz conventions held annually in different cities. These were good value for learning and performing. He also took some music subjects at the Con and studied harmony privately. Ken joined a pop band called Nova Express in 1968 at the age of 21, which gave him first taste of being "professional".

The pop band lasted a few years with some success and a lot of experiences (not all good, not all bad). After it fell apart, Ken began to play with Alan Lee at the Prospect Hill Hotel in Kew and was sitting in with various bands. He returned to study and qualified as a social worker. Significantly he joined a group of musicians who held weekly jam sessions behind closed doors to learn the art of improvising working on standards,bebop and the music of Lennie Tristano, Lee Konitz and Warne Marsh. The company included Murray Wall, Mike Murphy, Jeremy Kellock and later Simon Wettenhall, Ron Francis and Ian Mawson.

Ken was lucky enough to be introduced to Frank Smith in these times. Frank ran a recording studio, but was legendary for his jazz saxophone playing. Alto sax was his primary instrument although he played other horns very well. He was very generous and taught Ken for free. Although it was only a handful of lessons, Frank impressed on him the importance of letting the saxophone "sing". He talked about breathing and how to project the sound.

Meanwhile The Alan Lee group at the Prospect Hill Hotel in Kew morphed into "Plant" (without Alan Lee) and moved venues to the Polaris Inn Hotel in North Carlton. Ken moved with the band, and played at the Polaris Inn Hotel every Saturday night for the next 3 years. linda George who had sung with the pop band joined the band and David Allardice was there on piano as well, Ken began working with the late Gary Costello (bass) in the pop band Straw Dogs. He took up the flute having some lessons from Vernon Hill and continued writing arrangements and studying harmony. while this era seemed to be one where jazz/rock fusion was all the go, the beboppers acted like jazz guerillas doing lightning raids playing acoustic gigs despite popular taste and choosing obscure bop classics. the artists Co-op at Ormond Hall was a case where this would happen, as well as the back room at the Kingston in Richmond.

By 1975 several of the bebop fraternity had gone overseas so Ken and a few others made a recording for Jazz Note called “Bebop Inc”, before themselves "splitting"

At 28 years old, Ken went to live in London for nearly four years. From that base, one of his first trips was to the US to check out some of the action in New York, see some of the living legends of the jazz scene and catch up with his mates. He had a couple of lessons from Warne March in LA. Back in London he made some new musical friends and after working as a social worker for a couple of years, became a full time musician, playing in a cabaret band three nights a week at the Blitz Club. Other gigs were more fulfilling such as playing for the Jazz Centre Society of London, at the Pizza Express and the 100 Club.. He visited Ronnie Sco`tt’s regularly and saw many great jazz musicians visiting from the US.

At 32 Ken returned to Melbourne and started his own band with Murray Wall, Ian mawson and Ron Sandilands. playing at the Met downstairs at Discurio amongst other places. Over the next few years, in the early ‘80s Ken’s activities included a film soundtrack “Exits” with a young Paul Grabowsky; playing with Suzy Dickenson’s Bop Benders with old friend Gary Costello; starting his own Quintet with Margaret Morrison, Alan Browne, Gary Costello, and Mark Fitzgibbon and performing in a show for The Last Laugh for twelve months.He also did a season with the Flying fruit Fly Circus in Albury.

In 1983 he received his first Australian Council grant to go to Hamburg, Germany to study with the famous US saxophonist Herb Geller. Herb, like Frank Smith before him, distinguished himself by his generosity as well as his great musicianship and included Ken on a gig with the fantastic trumpeter Benny Bailey. In fact Herb taught Ken most by taking him to jam sessions and playing alongside him.

Back home again at the end of 1983, Ken picked up where he'd left off, with regular gigs at the Limerick Arms in Sth melbourne and the Tote in Collingwood. soon he started a nonet with Gary Costello, Alan Brown, Doug DeVries, Jex Saarellaht, Peter Martin, Bob Venier and Ian Hellings with Margaret Morrison on vocals. This nonet recorded an LP entitled “Lush Life”, and gigged occasionally at The Limerick Arms Hotel, Chez Escoffier, and once at Melbourne Uni. Ken also joined a band at this point with Judy Jacques and Graeme Morgan. Matt Kirsch, Peter Jones (also Bob Sedergreen) and Jeremy Allsopp.

In the late ‘80s, Ken began working with Theatre productions, playing and touring with hit show "Cho Cho San" for Playbox Theatre and composing the music for the play “The Imposter”. Ken also performed original music in the Django Reinhardt style with Andy Baylor at the Lord Newry Hotel in Fitzroy.

By 1990, when Ken was in his forties, he received his second Australian Council grant to make the live album "Afternoon in Libya' – all the content was original instrumental compositions by Ken. The renowned Moovin’ and Groovin’ Orchestra was formed around this time and Ken joined as a founding member. It wasn’t too long before he received his third grant to record new original works with “Afternoon in Libya”.

With comedian friend Steve Blackburn, Ken had some television work with Full Frontal and performed regularly with the Moovin’ and Groovin’ Orchestra (MGO) and other small bands around Melbourne. He continued to teach, which he'd begun back in London in the late 70s. He was given some tutoring work by Peter Clinch at Melbourne State College. Peter had been another influence and Ken had sought him out for a couple of lessons a decade earlier. Peter Martin who played in the nonet was also an influence, again by dint of his generosity as well as musicianship.

The last decade has seen Ken producing a series of CDs. with the MGO. He tackled Porgy and Bess The band recorded his arrangements and performed the show in cut down style at the Iwaki Auditorium with the help of Simon Myers and Steve Blackburn.. Featured vocalists were Shelley Scown, Rebecca Barnard, Matt Kirsch and David Williamson.

In 2005 there followed 2 CDs of original instrumental music from the MGO; Zoo Music and Some New Stuff. Then in 2007 came Return Journey- a Jazz Portrait of Europe , again with the MGO and again all original, featuring Michelle Nicolle on many vocals.

As well, Ken has produced 3 volumes of Jazz at Richmond Hill, small band recordings made as a result of a series of concerts that were given at that venue between 2002 and 2004. They bear the subtitle "Combos with Schroder" as he was the MD for all concerts.

And then there is Casa Nova, a disc made with Doug de Vries and Denis Close- Brazilian influenced music. Over the years, Ken has added other instruments to his collection, so he often plays tenor, clarinet, soprano or one of the other horns that so many reed players like to double on. His plan for 2010 is to write some music that is about Australia.