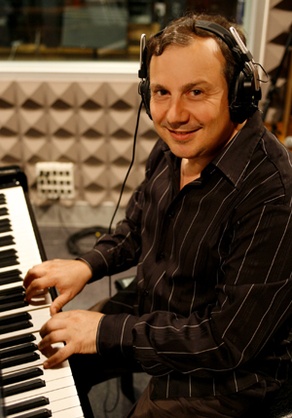 Joe Ruberto (or Robertino as he was affectionately dubbed as a youngster) has been an entertainer since the age of 13 playing the piano and the piano accordion.

It was at an early age that he won numerous competitions including Network Ten's Showcase and Channel Nine's New Faces and recorded a number of very successful albums for WNG Records.

Joe has performed on television and in concerts throughout Australia from Brisbane to Perth, Adelaide, Sydney, Tasmania and just about everywhere else in between.

He has various overseas performances to his credit none more memorable than the 1996 concert in Japan with the Theatreworks Company and the performances in 2003 and 2006 aboard the famous cruise ship "The World" during its time in northern Australian waters.

In 2004 Joe also enjoyed an extended stay on the South Pacific island of New Caledonia having been invited to perform with his jazz band at the yearly Music Festival held in various venues in and around the capital Noumea.
His band has since been invited to return to New Caledonia and has also been repeatedly invited on a yearly basis to participate at the Noosa Festival on Queensland's Sunshine Coast.

Joe is regularly in demand as musical director for local and international acts and along the years has accompanied Normie Rowe, The Drifters, Phyllis Diller, Ernie Sigley, The Coasters, Rick Sonata, Elvis To The Max, Nilla Pizzi, Luciano Tajoli, Manuela Villa, Dario Sebastiani and a host of others too many to list here.
He also led a thirty piece orchestra for the International Song Festival held in Melbourne and staged at the prestigious Palladium at Crown.

Joe’s formal qualifications include a B. Sc., Dip. Ed.(Monash University) and a Graduate Diploma of Music ( La Trobe University).

Fellow musicians unanimously agree that Joe Ruberto is not only an exceptional musical talent but also and above all a gentleman with whom collaborating is an absolute pleasure.