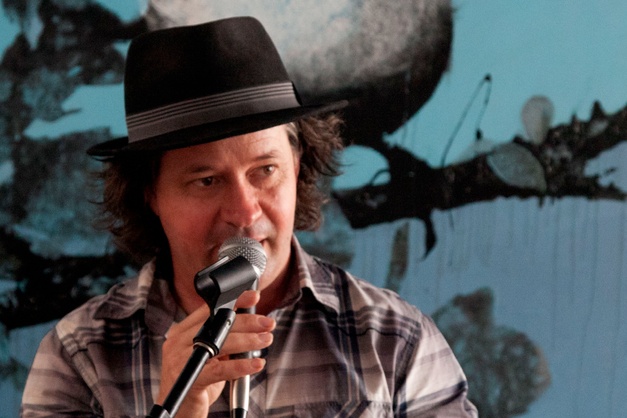 age of eight. Following his older brothers lead, he switched to guitar two years later. Self

taught initially he returned to Mr Goon’s tuition as a guitar student in his mid teens. At

music in 1977 were he undertook AMEB exams. In 1980 James enrolled at the Brisbane

College of Advanced Education to commence a diploma of Secondary School Teaching.

two years. After resigning from the Qld education department at the end of 1985 he spent

AMEB. Throughout this period James played in a variety of different music groups. The

Vocal jazz ensemble SCAT including a tour of California in 1984, pop duo The Blue in

Margot Leighton. For four years, firstly in Sydney then in Melbourne he made his living

performances on TV and as part of the Spolleto Fringe Festival in 1989. Whilst

Seeking a change in musical direction, in 1990 he enrolled at the Victorian College of the

Arts completing an Honours degree in improvisation in 1994. In the first year of the

course he was awarded the prize for best student. After completing the VCA course

Festivals, Judy Jacques’ Lighthouse at the Edinburgh Fringe Festival and the Lucky Star

and southeast Queensland (Woodford Folk Festival.) In 1997 he toured India as part of

Drift, the house band at the Titanic Theatre Restaurant. In 2000 he was guest soloist with

Project with Serge de Lucio and Scott Dunbabin and his quintet the Last Band Standning.

In 2004 James opened the Famous Blue Raincoat with business partner Kaz Seed. A

restaurant and music venue, it has been operating successfully for nine years and in 2010

success of the ‘Raincoat,’ James and Kaz started a new venture with Sam & Kath Anicic

in 2010. Pip & Seed is a gourmet deli, green grocers and organics store.

A prolific songwriter and composer, James has written a musical called Private Eye

orchestra and a vast number of instrumentals & songs, one of which, The Ballad of James

Alexander Leighton, was a finalist at the Port Fairy Folk Festival song writing contest in

1995. His composition Way Out West was recently included in the first edition of the

James has played on CD’s with Judy Jacques Lighthouse, Going for a Song (1997,) the

produced CD’s as a soloist, String Theory (2010.) as well as a compilation CD of

Blue Raincoat (2008). The Nexus Project CD, First Light will be released toward the

tutoring VCE students at Williamstown High School. He has written a series of Guitar

tutors, which are as yet unpublished.