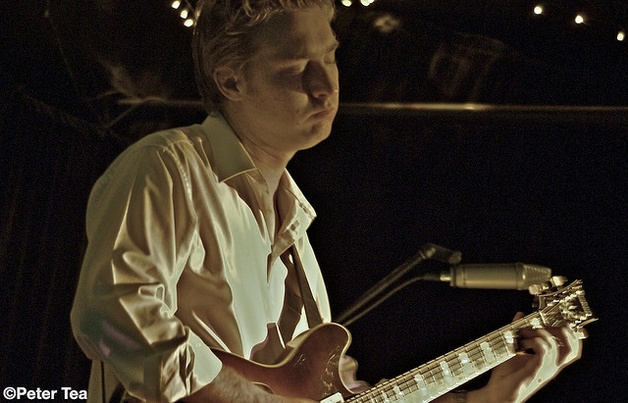 James was born in Adelaide, South Australia in 1974 to musical parents. He became interested in music at an early age and began playing the guitar at the age of 12. Initially inspired by rock music of the sixties and seventies his love of jazz took over at the age of 16. Two years later James was gigging in the working band of renowned clarinetist/saxophonist Andrew Firth with whom he stayed until 1994.

After working with the cream of Adelaide’s jazz and rock musicians James relocated to Sydney in the summer of 1996, where he quickly became one of the most in-demand guitarists in the country.javascript:;

He has played and/or recorded with:

James has recorded 4 CD’s under his own name. The second, “All Out” won an ARIA award for best jazz album in 2000 and the third, “Thrum” was nominated for the same award in 2002.

In 2000 James was co-winner of the National Jazz Awards held at the Wangaratta Jazz Festival and in 2001 won two Mo awards for best jazz instrumentalist and best jazz group.

As well as performing nationally, James has made several successful tours to Europe including with the Chad Wackerman band in 2000 and theTheaktet in 2001 and 2004.