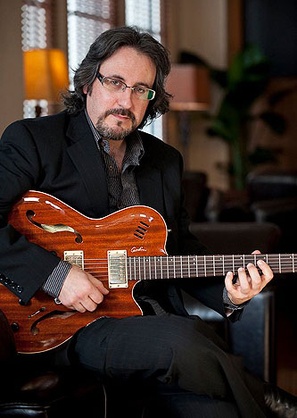 ... I like spreading myself around to experience as many elements of the music performance as possible so that every gig is a challenging learning experience working with different musicians ...

Jack Pantazis has been on the professional music scene for almost twenty years. His versatility and strong guitar skills have enabled him to effortlessly move between genres, from jazz to latin to rock and anything that has been required of him.

He has played with the Australian Pops Orchestra, the original group Black Taxi, musical productions such as Rent, Sweet Charity and Les Miserables, Mama Mia, Lion King, Wicked, his own group The Jack Pantazis Group, TV appearances on Bert Newtons Good Morning Australia, the ABC's The Art Show and numerous pick up groups over the years.

Currently Jack performs regularly with The Daryl McKenzie Jazz Orchestra and his own group, The Jack Pantazis Group. The ‘Group’ were recently heard performing live on the radio program ‘Jazz on Saturdays’ on 3PBS, with presenter David Shields.

A strong love for improvisation is very apparent in Jack's playing, especially in the jazz style. In 2007, Jack released his first CD of original compositions, ‘WHAT?’. This will soon be backed up with a brand new recording to be released this coming year and will feature two tracks with guitar jazz-fusion legend, Mike Stern.

Below is The Age’s Derek Leather's review of Jack’s CD ‘What?’.

The catchy choruses in the opening tracks of What? are soon buzzing around the brain and it's surprising that some of guitarist Jack Pantazis' tunes waited a decade to arrive on CD. He has performed in clubs, for stage shows and television, as well as teaching at tertiary level. His quartet - with Andrew Jackson on alto sax, Adam Speigl on electric bass and Tim Coghill on drums - play a jazz fusion that flirts with bebop riffs on What? and Key of Scarlette, while Ostrich Feathers could blow all the way to an LA soundtrack studio. Pantazis takes different turns on the closing tracks.

Key track: The 16 minute Suite in which Pantazis adds to the bright array of guitar stylings already on show. It opens in a spacey zone with thick bass lines and echoing guitar then, with an oblique turn, Pantazis drops into rich folkish acoustic solos that gradually meld with electric guitar overdubs. He reprises the spare solo acoustic sound to go out on. -- Derek Leather

And, here’s a link to read a review and interview with Jack about his CD ‘With The Little We Have’.