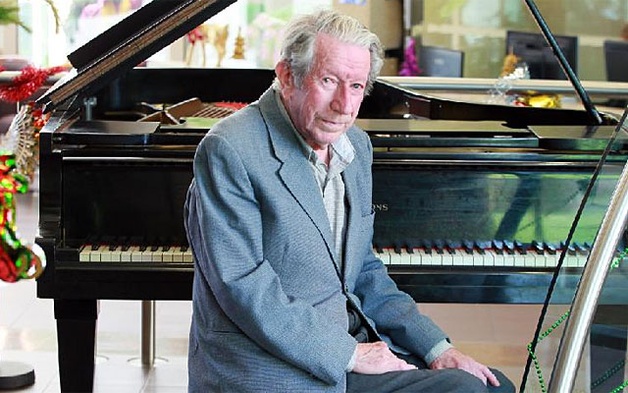 Pearce was a pioneer of Australian jazz, his career spanned seventy-five years as a professional musician. Beginning as a trumpet player Pearce, along with his elder brother Cedric, and friends Tom Pickering and Rex Green were the founders of Tasmania’s first jazz band: The Barrelhouse Four, one of Australia’s first traditional jazz bands. In 1946 the band attended the first Australian Jazz Convention, and were the first representation of a Tasmanian jazz band on a national stage.

Following his army enlistment, Pearce was posted to Darwin for three years, then returned to Melbourne where he studied composition at the Melbourne Conservatorium of Music for the next three years. During this time Pearce began attending the Uptown Club to hear Graeme Bell’s band. Dental problems led him to give up the trumpet and take up the trombone with its larger mouthpiece in replacement. When the Bell band returned from its first European tour, Pearce joined the band on trombone for a series of tours and recording sessions. As Pearce was in his final year of study he declined the invitation to go with the Bell’s on the second tour in 1949. But continued to perform in Melbourne with Tony Newstead’s band.

After completing his diploma, in 1950 he went to England with Don Banks and Ivan Sutherland. Pearce’s early orientation in London was spent meeting musicians, listening to music, both recordings and frequenting any live performances he could. Regularly attending concerts of the Society of Contemporary Music. Excluding his time in the Bell band, during the course of his music studies, Pearce had invariably changed his objectives from performing to composing, and although still extremely influenced by jazz it was classical music that entertained his interests during this time. While working mundane jobs and pursuing his musical interests wherever possible, it was fourteen months after his arrival that the British Australian Embassy thought it a good idea to showcase a concert of Australian chamber music to the people of London. Successively the three boys: Pearce, Banks and Sutherland, were all invited to provide compositions for the event, along with other Australian composers: Coverage of the concert was so vast even numerous newspaper write-ups were featured in Australia, including the Mercury newspaper back in Hobart, casting the recital as the first ever London concert showcasing all-Australian chamber music. With the recent success of the concerts, this evoked a keen interest back into Pearce’s music. Shortly after this he switched to piano and joined Mick Mulligan’s Magnolia Jazz Band. Peace toured extensively with them throughout Europe, and remained with Mulligan until the band broke up following a serious road accident involving its touring bus. Pearce went on to play casual work, inter alia, Sandy Brown, and Bob Mickelborough.

In 1955, he returned to Australia with his family, to work with his brother Cedric in Fuller’s Bookshop in Hobart. Pearce formed a sextet in a more mainstream style, to play ABC broadcasts, produced by Ellis Blain, this lead to a series of recordings produced by Jack Smith of the ABC for the record label Swaggie. Over a seventy-five-year period, he has been leader or co-leader of various other groups, all of which have become cornerstones of Tasmanian jazz, including the Pearce-Pickering Jazz Band and the Pearce-Picking Ragtime Five.

After twenty-three years, 1981 saw Pearce’s retirement from Fuller’s Bookshop, in favour of slowing down. Following illness Pickering also retired around the same time. With the retirement of Pickering, and other band members moving out of Hobart, and the Pearce-Pickering Jazz Band evolved into the Ian Pearce Quartet, with Paul Martin replacing Pickering, Ken Martin joining on bass, and Michael Colrain remaining on drums. In 1973 the Wrest Point Hotel was refurbished which included theconstruction of the seventeen-storey hotel tower. The landmark became nationally identified with Hobart. This development was a result of John Haddad, one of the company's executives being assigned the role of getting a casino license for the hotel. A State referendum was passed and the hotel now incoperated a casino, and was renamed the Wrest Point Hotel and Casino. Pearce had always had a long running association with the Wrest Point Hotel since his performances there in the early ‘40s as piano player with his trio and trumpet player in Ron Richards Orchestra. With the anticipated opening of the casino, executives’ thought it would be a good idea to have a live jazz band every Sunday afternoon in the new Boardwalk Bar. The decision was then made to approach the only probable candidate for job, and with that in 1984 the Ian Pearce Quartet took up residency for the next seventeen years.

When you start to consider that the inexplicable process which enabled a select few musicians to improvise and compose in the jazz idiom start fading-away before the artist turns forty, Pearce almost astonishingly in his late sixties was in the peak of his career. As a pianist Ian Pearce can boast a style genuinely unique in Australia. The early combinations of American swing era piano players Teddy Wilson and Jess Stacy who both rose to fame in Benny Goodman’s band are very apparent in Pearce’s style. Further to this the resonance of Earl Hines, Fats Waller and James P. Johnson who were all masters of the Harlem stride piano style can be observed in Pearce’s piano style. While extremely capable of interpreting melodies in many other styles, it is the stride piano styles that underpinned most of Pearce’s finest work.

In 1995, Pearce’s talents were rightfully recognised beyond the shores of Tasmania. His creditable place as a composer of national stature, and interpreter pa excellence of the considerable library that form the lexicon of classic jazz standards, saw him made a Member of the Order of Australia. “The citation mentioning not only the musical summits he has attained, but also his many years of non-playing support for the cause through his leadership in Tasmania’s Jazz Action Society and his university lectures on jazz history”. Within the jazz sorority the honours kept coming with lifetime achievement awards from the Mildura jazz festival and placement on the Honour Roll at the Montsalvat jazz festival in Victoria. In ’96 Pearce was further made patron of the St Helens; Suncoast jazz festival, receiving the Satchmo Award for his services to Tasmanian jazz, throughout his fifty-five year career. In 1997, Pearce at the age of 76, was to embark on his first US tour, as a pianist in Steve Waddell’s Creole Jazz Band. The band did a series of dates including appearances at festivals in Los Angeles and San Francisco. Pearce yet again achieved feat being the only Tasmanian musician at the festivals performing in the only Australian band on the program

It is appropriate to mention here Pearce’s non-jazz compositions, apart from his student works in the Conservatorium period, 1961 saw him compose a piece of music entitled “Kaywana”.  Pearce composed this for light orchestra and it was accepted as one of the eight finalists pieces in a competition run by the ABC. Kaywana together with the other seven finalist compositions were recorded by the Sydney Light Orchestra and released on a 33 1/3 LP by Columbia records entitled “Holiday Bound”. This continuing success led to Pearce being commissioned to write a film score for wind quintet for a local documentary film on Tasmania’s Southwest coast wilderness. Furthermore the Tasmanian Symphony Orchestra performed his composition “Pastorale”, which was subsequently broadcast on ABC national radio.

With the very sad passing of Ian Pearce can hear his music on a considerable anthology of CD recordings, radiobroadcasts, and read of his accomplishments in national magazines and newspapers. Approaching his 91st year, whilst still performing with undiminished vitality, Pearce was one of the unsurpassed pianists of traditional jazz in Australia. Having the same humble, genuine approach to his performances is what has exemplified him as being at the forefront of the success of jazz developments in Australia and overseas. His numerous contributions as co-leader of one of Australia’s first jazz bands, the Barrelhouse Four, to assisting pioneer the trad jazz revival as part of Mick Mulligan’s bands in the UK in the late 1950s. Together with Don Banks and Ivan Sutherland were the first to have their Australian music compositions performed to European audiences in London. The partnership of Pearce-Pickering saw them to help augur the ragtime revival in the late 60s with the Pearce-Pickering Ragtime Five, in a succession of recording and performance dates.  These along with many other achievements and milestones in a seventy-five year career have rightfully etched Pearce’s place in Australian jazz history. A man who undoubtedly is a national treasure and has contributed so much to Australian jazz together with being the leading force in keeping jazz alive in Tasmania for so many years, was interviews by Robert Cox in 2001, about his career achievements, Cox asked of Pearce, “Do you have any regrets? Pearce in his soft, well modulated voice, quiet manifestly replied, “No, no regrets”.

Ian was not only one of my mentors, but also true friend and always a gentleman. I feel very privileged to have performed with him on many occasions and also to have written an honours thesis about his life and achievements in 2011. Ian was know for his humility and was admired buy so so many musician’s Australia wide; will be deeply missed by the fraternity of Tasmanian and Australian jazz musicians.