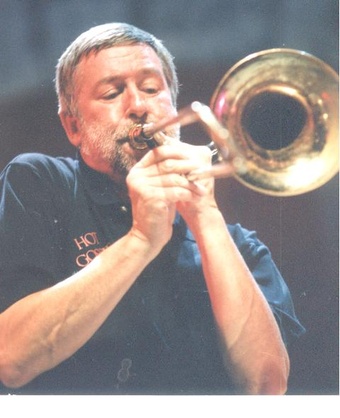 First attempts at music, at age 16, competed unsuccessfully with pink socks, Presley, pimples and Penny. But, hidden away in the dark recesses of the parental classical  music collection was a scratchy 78 of Graeme Bell’s Australian Jazz Band which was the doorway to a lifelong passion for jazz

In the 60s a trombone was purchased but even lessons from Melbourne legend Frank Traynor could not overcome raging hormones and it was some time after marriage that the dusty, neglected trombone was discovered sulking under the bed.

The 1969 Australian Jazz Convention provided the catalyst for a renewed attempt at performance; the Golden Gate Jazz Orchestra was formed and played at the convention with the first of Herb’s compositions in the repertoire. In the early 70s the rather ponderous name was dropped in favour of “Golden City Jazz Band” ( to commemorate a long residency in a Ballarat hotel of that name) which he still leads today.

Brushes with many musical styles including Rock, Classical & Brass Bands, have only been relatively short forays into worlds other than classic jazz. A champion of the Australian sound and local jazz compositions Herb has himself written many tunes including three winners, and many minor prizes, at the AJC Original Tune Competition . The 2 tunes presented here were not competition entries.

The Golden City Jazz Band has recorded 10 albums - all produced and arranged by Herb - 4 entirely of Australian compositions, appeared by invitation at Sacramento (USA), toured Europe and Scandinavia (1995, ’97, ’99 and 2003) & was the house band for the Ballarat Jazz Club’s weekly sessions for over 3 years.

He is the writer/compiler of “Eureka! THE Chord Book” which is doubtless the definitive reference book of chord progressions for Traditional jazz.

As well as a composer and performer, Herb has been a private researcher, historian & discographer for all his adult life.