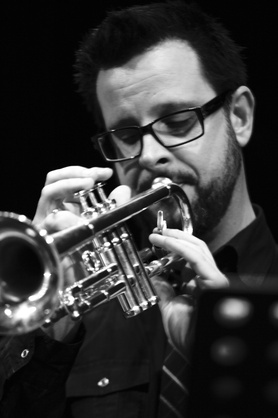 Multi-award winning Australian trumpeter, Eugene Ball has received widespread national and international recognition throughout a professional career that has featured performances with some of the biggest names in music.  Along with high profile freelance performances, Eugene has also toured nationally and internationally with some of Australia’s most celebrated groups, including The Hoodangers, the Andrea Keller Quartet, the Allan Browne Quintet, the Australian Art Orchestra, and the Bennett’s Lane Big Band.  In addition to being a sought after performer, Eugene is a prolific composer, music director and arranger. He was awarded the 2011 APRA/AMCOS Best Australian Jazz Song and received a Bell Award in 2008 for the Best Australian Jazz Composition of the Year. His compositions and arrangements have been performed by internationally renowned ensembles including the Melbourne and Vancouver Symphony Orchestras. Complementing his outstanding record of professional achievement is Eugene’s academic and music education career. He holds a Masters Degree in Performance (Melbourne University) for which he was awarded a Melbourne Research Scholarship and is a respected lecturer in trumpet, composition, arranging, and music education.