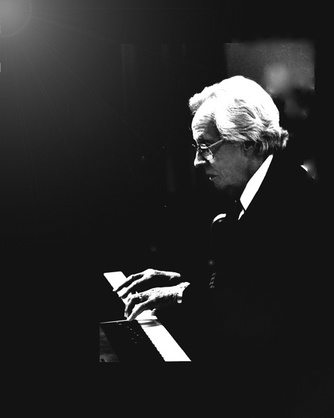 Australian born pianist and composer Bryce Rohde has had a career in jazz spanning more than 50 years. During that time he has performed with many jazz giants from a wide variety of jazz styles, including Count Basie, Miles Davis, Billie Holiday, and John Coltrane. Certainly one of his more notable accomplishments was as a founder in 1955 of Australian Jazz Quartet that was major jazz force in Australia for four years and which played such prominent U.S. music halls as Carnegie Hall and the Chicago Opera House and recorded for Bethlehem. That group released around seven albums. Influenced early by Art Tatum and Nat King Cole, Rohde became absorbed with the George Russell Lydian Concept which has flavored his playing ever since. On later albums, his work takes on the delicate, diaphanous, poetic feel that characterizes the music of Frederic Delius. It is no accident that Rohde listens to 20th century classical music as often as he can find it. The pianist has also published a book combining original jazz compositions and his other passion, black and white photography. It shares the title of one of his excellent recordings, Turn Right at New South Wales. Rohde has also joined with outstanding bass player Bruce Cale, who was featured on another Rohde album -- Always Come Back Here. Rohde has seven albums as a leader of his own groups. Regrettably too few of them have been released in the United States. David Watson's Music in the Vines/Sonoma Jazz label has tried to help cure this unfortunate oversight by releasing two of them on that label. Rohde has made San Francisco his home base where he continues to perform and record.