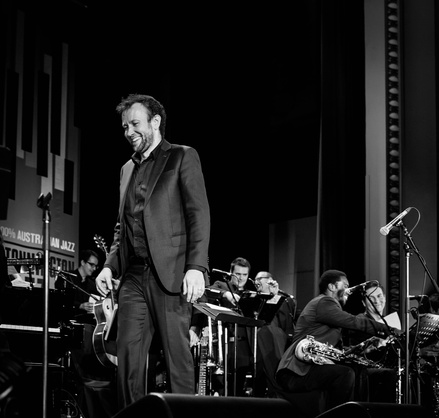 Andrew Murray (Music Director, Composer, Arranger, Trombonist and Pianist) has worked as the Musical Director for Victoria Police Bands, as an instrumental teacher at both Secondary and Primary level, directed voice at National Institiute of Youth Performing Arts, and works as a freelance composer/trombonist. As a leader Andrew runs 15-piece big band ATM15, and funk outfit The Randy Anderson.

During his career as a professional trombonist Andrew has performed with such musicians as Carla Bley, Steve Swallow, the Essen Philharmonic, James Morrison, Joe Chindamo, Darryl Sommers and Pete Murray.

Andrews education includes studying a Masters in Music (Composition) at the University of Music Dramatic Arts in Graz Austria, a Bachelor of Music (Jazz) at the WA Academy of Performing Arts, and a Diploma of Music (Jazz/Popular) at the Gordon TAFE.